Rome: Benefit event for the C.I.R.A. 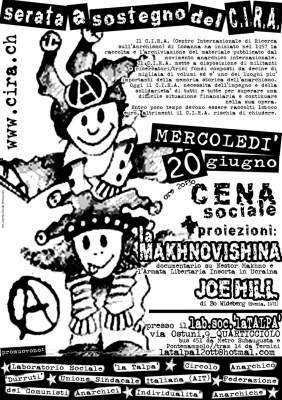 The CIRA (International Centre for Research into Anarchism) in Lausanne (Switzerland) began its work of collecting and archiving the material published by the international anarchist movement in 1957.

The CIRA gives militants and researchers the opportunity to consult archives made up of tens of thousands of volumes and is one of the most important places as far as the historical memory of anarchism is concerned.

Today, the CIRA is in need of the efforts and solidarity of everyone if it is to get over a difficult financial situation and continue in its work.

Within a short space of time, the CIRA must raise €100,000 or else it will be forced to close.

For more on how to help the CIRA, see www.cira.ch